A garden celebrating the nursing profession in the 21st century and inspired by the legacy of Florence Nightingale, will finally be unveiled at the RHS Chelsea Flower Show on 20th September, with a re-imagined planting palette of late summer flowers and grasses.

Designed by Robert Myers, The Florence Nightingale Garden – A Celebration of Modern Nursing, was first planned to be at the show in 2020 to honour the bicentenary of the acclaimed nurse, social reformer and statistician known as the founder of modern nursing. It will return to Main Avenue in its original design, depicting a courtyard garden enclosed on three sides by a sculptural timber pergola. Replacing the shady woodland garden planned for last year’s show, the autumn garden will be a bright and vibrant space with drifts of colourful late-flowering perennials, grasses and bulbs and with Florence Nightingale’s favourite flower, the Foxglove, incorporated in the form of seed heads, bringing a unique seasonal element to the design.

Robert Myers said: ‘Having done a number of Chelsea gardens, I’m very excited about working with an autumn plant palette. The planting in the centre of the garden was initially conceived using spring plants that would be in flower under new, light green tree foliage. instead, we are looking at more open planting. The original design also used many medicinal plants that would have been used in Florence Nightingale’s time and plants that feature in her childhood pressed flower collection. These will still feature throughout the garden, with a focus on autumn species including Chinese rhubarb, witch hazel and autumn ferns.”

“The garden was originally intended to mark the bicentenary of the birth of Florence Nightingale in 2020, celebrating her role in making nursing the highly skilled profession that it is today.

In 2021 this has become more relevant than ever, with nurses at the forefront of the health emergency we continue to face. As the founder of modern-day nursing, many of Nightingale’s principles on hygiene and statistical evidence underpin the way in which the world has tackled the Coronavirus pandemic and, over the past year, we have all come to recognise the importance of gardens for our health and wellbeing. The garden is a wonderful opportunity to celebrate Florence Nightingale’s legacy, today’s inspirational nurses and the restorative power of nature.”

Reflecting the revolutionary ‘pavilion-style’ hospital layouts advocated by Nightingale, the restorative garden has been designed for viewing from inside the building, as well as for strolling through with places to rest among naturalistic planting and a reflecting pool to engage the senses.

Key elements of Florence Nightingale’s life will be referenced throughout the space, including the pool which recognises her insights into drainage and cleanliness. In addition, images of Florence Nightingale will appear in slightly opaque windows and echoes of her handwriting will seem to be inscribed onto the walls to embody her extensive writing in support of healthcare reform. Alongside these, images of some of the flowers found in Florence’s pressed flower collection will also be inscribed onto the wall, including peonies and ferns.

In recognition of modern-day nursing, a collection of the Florence Nightingale Nurses badge will be set into the path as small bronze roundels with a larger badge, redesigned to mark the bicentenary, marking the end of the trail. Denoting both Florence Nightingale’s enduring legacy and her ability to inspire the next generation of leaders in the nursing profession, the badges were originally created for nurses who qualified at the Nightingale School at St Thomas’s Hospital in London – the world’s first professional nursing school established by Florence Nightingale in 1925.

The garden is sponsored by the Burdett Trust for Nursing.

The Trustees are keen to support innovative, nurse-led initiatives that will decrease hospitalisation and reduce morbidity and mortality in cardiovascular disease patients. All projects must be nurse-led and have the nursing contribution to healthcare at their core.

The COVID-19 pandemic has forced a renewed focus on digital health - defined as the process of using information technology, digital hardware and devices, software and the Cloud, and the collection of data to measure clinician interventions. Digital health can transform the way we deliver patient care: making it safer, leading to better patient outcomes and improving efficiency in the way health services are planned and delivered. 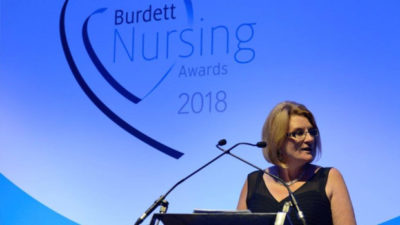